The main Ecuador religion is Roman Catholicism, as is true throughout much of Latin America. Over 90% of Ecuadorians are Catholic. The church is a predominate feature of just about any town square in Ecuador. Their Catholic faith has been mixed with the beliefs of the indigenous people. 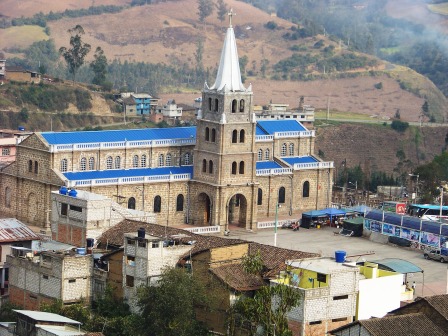 The church in the tiny town of Chimbo in Bolivar Province.

The Andean tribes have strong beliefs ties to the mountains that surround them. The different mountains are called "Mama" and "Taita" (father in Quichua). They are believed to have a direct connection with the fertility of both the land and the people.

Catholic shrines can be seen on various mountain peaks. These were built to replace Incan and other sacred places.

The remains of ancient Inca and Cañari religions can still be seen in Ecuador. The Templo del Sol (the Temple of the Sun) at Ingapirca is one example. Ancient beliefs are still a  part of many religious holy days and customs. 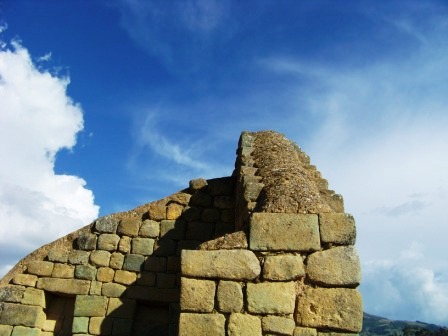 The Templo del Sol at Ingapirca.

Many Africans arrived in Ecuador as slaves, as early as the 17th century. They brought with them their own religious beliefs. Remnants of their religion can be seen on Ecuador's coast, where some still practice ancestor worship and voodoo.

A very obvious mix of Catholic and indigenous beliefs can be seen in the many festivals celebrated throughout the year.

One example is the Day of the Dead (Día de Difuntos) celebrated on November 1. Long before Spanish conquest, the people would leave food and drink for the dead. This custom continues on, in a now so-called Christian holiday.

Other fiesta days to celebrate harvest and sun cycles have also been given Catholic names.

A growing number of Protestant religions can be found in Ecuador. The development projects sponsored by these groups have been accepted in many communities due to a mutual respect for hard work.

Many Ecuadorians, whether Catholic or Protestant, put much faith in local healers or shamans. These use ancient remedies passed down by their forefathers and magic to "heal" people.

Ecuador religion has a strong hold on the people. They highly respect the Bible and the subject of religion isn't a touchy one. People can be seen discussing their beliefs openly with Bible in hand. 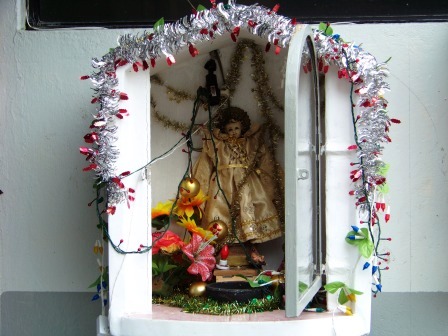 Shrines such as this one are common on the side of the road.

Religious decorations are prominently displayed in homes, businesses and even on public transportation. Many trucks are decorated with religious sayings which include reference to Jesus, María (Mary), and Jehová (Jehovah).