The following is a bit of a saga. I've tried to make a quick review of the main lessons learned along the way. If you really want the main idea you can skip to the end. 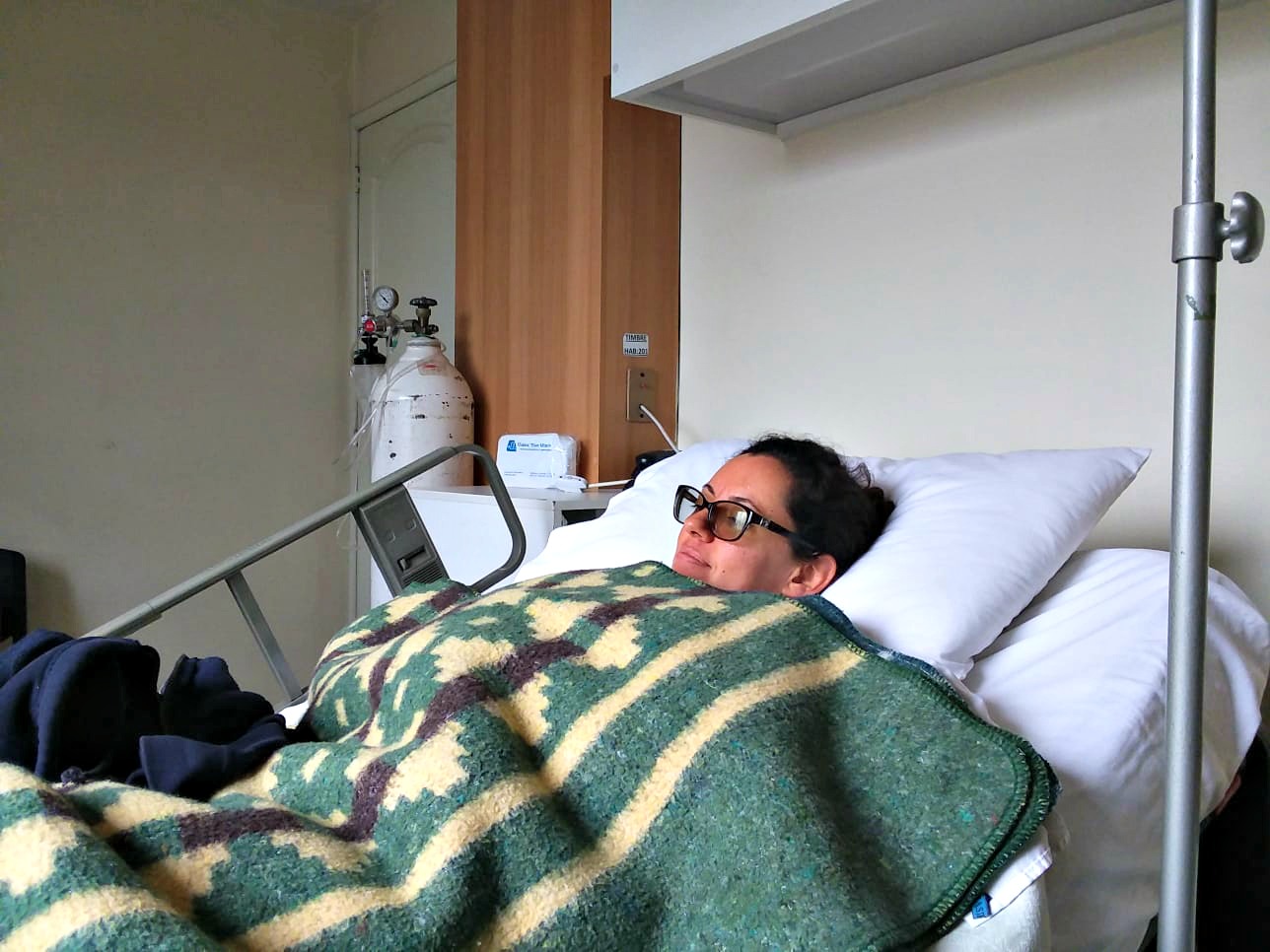 Waiting for surgery. Quito feels very cold when you live in the jungle!

Late one night I awoke with a terrible pain in my abdomen. I'm not one to go to the doctor for every little thing, but this was enough for me to go into the emergency room of the public hospital in Tena, Ecuador.

There were hardly any people, so I was seen pretty quickly by a doctor who after examining me requested blood and urine tests to pinpoint to problem. I was able to have this done right then and there and had the results in about an hour.

Nothing was found, so they asked me to come back the next day to have an ultrasound. We went in early and I was seen quickly. The doctor was very nice and alerted me to a problem that was not part of the requested exam.

Lessons: The public emergency rooms have some good doctors and the attention is prompt and professional. There is no cost. However, the public hospitals will turn away less urgent cases if you have health insurance. In time, they will probably also turn away foreigners in general if laws requiring health insurance for tourists ever go into effect.

Many people told me that the short time in which I was able to have several diagnostic tests would be unheard of the US, where referrals are needed to see specialists and for certain specialized exams.

After the ultrasound results, the emergency room doctor said he would like me to have a CT scan. The machine in the Tena hospital was broken so he said I would have to find somewhere that had one. After several phone calls, we found that the closest option was in Ambato.

In Ambato at the Clínica Durán, I didn't need an appointment, so we walked in one morning a few days after my emergency room visit, had a CT scan, and had the results in half an hour. Cost: $75.

The next day back in Tena, I had an appointment with a gynecologist who, after looking at the test I had from the ultrasound and CT scan, said I would need an operation to remove the ovarian cyst detected in both. She had me get some blood work done to check for cancer to be able to determine how extensive the surgery would need to be.

The test results were supposed to be back Christmas day, but were delayed because of the holiday. Still I had them in less than a week. Cost: $75.

The visit to the gynecologist's private practice as well as a follow up visit to review the results cost $20.

What I learned: You can get tests done quite quickly. I did spend a bit of time on the phone calling different clinics in several cities to find places where I could get the tests done. Less than two weeks passed from the night I went to the emergency room to the ultrasound to the CT scan and, finally, until the cancer tests were read to me (which by the way were negative!). Plus the cost was way less than I would have paid back home.

At this point, I had three different doctors tell me that I would need surgery. Surgery in Ecuador was scary enough...I needed to find a doctor who I could trust! Here is where my family and friends became my biggest allies.

A friend helped me to contact a doctor in Quito. The doctor recommended a surgeon at a private clinic and set up an appointment for the surgery the following week.

In the meantime, a family member who had worked for many years as a nurse at the public hospital in Tena also helped. She took me to the hospital and we talked with a surgeon. He asked me to come in the very day that I had the appointment in Quito. He needed to perform his own ultrasound and tests and then would set up the surgery.

We were left with a choice. Go to Quito and pay for the surgery in a private clinic -OR- wait in Tena up to a month and have the surgery in Ecuador for free at the public hospital. At this point, my concerned parents had come to Ecuador to help. My dad said he preferred to pay and know that I was ok before he had to return to the States.

The morning of the surgery I was to go in early to the clinic to get some pre-surgery tests done. Our first impression wasn't very good. The building seemed old and dirty. There were only three people around: the lab technician and two nurses, one of which was also the secretary and security guard. 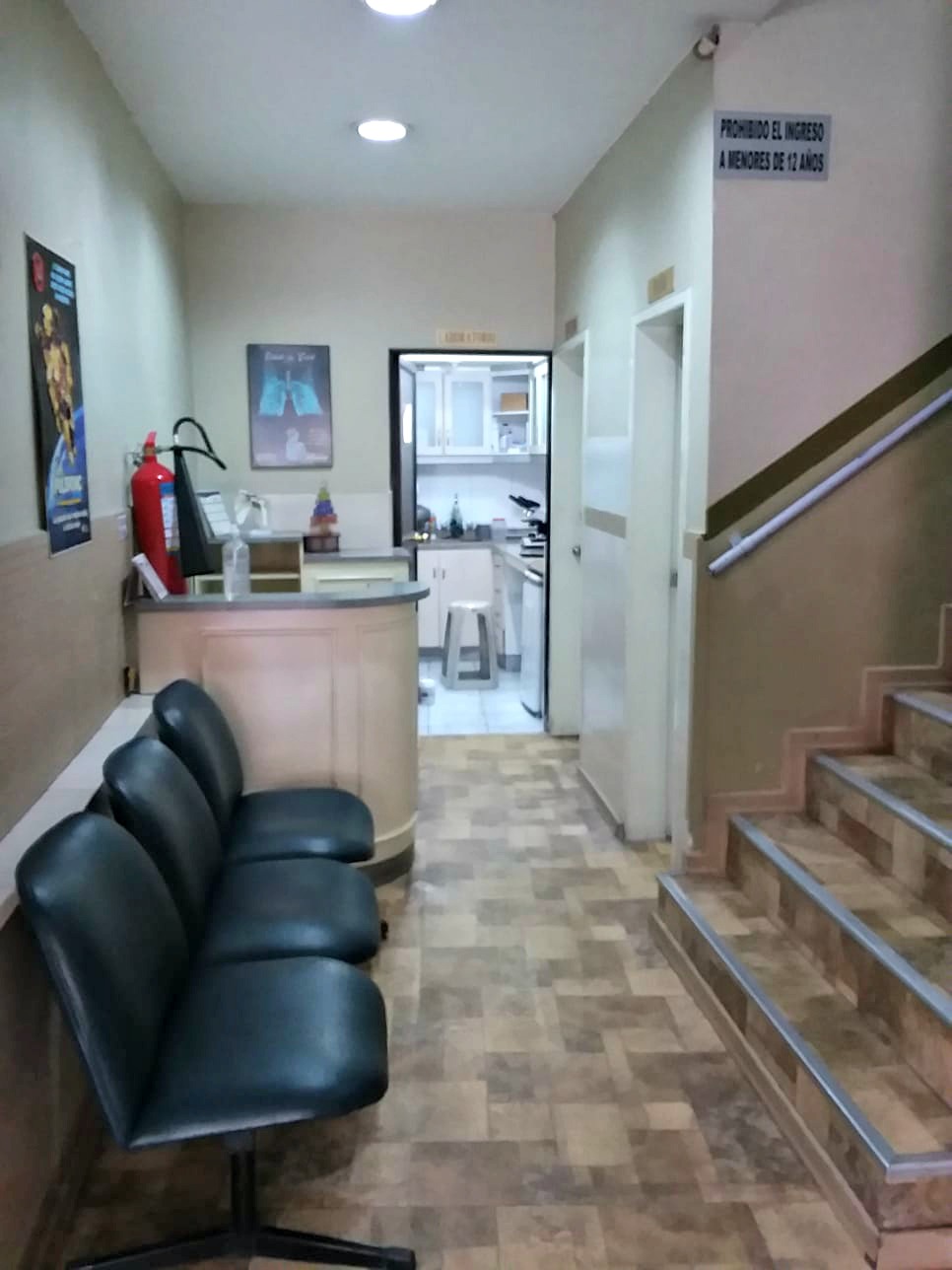 The lab and waiting area at the clinic.

A doctor was called. Later we learned he lived three blocks from the clinic and walks down whenever he's needed. He looked at my exams and requested blood work, an x-ray and an electrocardiogram before the surgery. He was not the surgeon. He said that the surgery would be around 1:30 pm.

The blood work posed a special problem. I had blood drawn twice in the two weeks previous in Tena. There was never an issue. Now, apparently due to the cold and the change in altitude, my veins disappeared. The first attempt at drawing blood left me passed out and not a drop of blood in the vial. After warming up my other arm, getting a bit of sugar in my body and a lot of deep breathing, the second attempt was successful.

After the x-ray, I was brought up to my room. I had my own room and bathroom. There was a couch where they said one of my parents could stay the night if they wanted. I was given a gown and told to get into bed. Then the wait began.

Hours passed. 1:30. 2 o'clock. We really started to wonder what was going on. Two nurses finally came to do the electrocardiogram and then attempted to start an IV. Again my non-existent veins posed a problem. After sticking me twice unsuccessfully, the nurse decided to call a doctor.

A doctor I had not seen before came in and stuck me two more times before finally starting the IV. By this time I was pretty stressed out. My hands had been pretty beaten up and hurt. I asked the doctor some questions about the surgery, but again he was not the surgeon.

Lesson 1: Extreme changes in altitude and climate can make drawing blood harder. It can also affect hemoglobin levels. As the lab technician explained to me, the higher the altitude the harder your body works to produce red blood cells.

Lesson 2: In Ecuador, everything runs behind schedule. Everything. This includes medical procedures.

Finally the moment came. At 6:30 pm, I was walked into the operating room. Yes, walked. There was no room in the hallways to wheel you in.

Doctors and nurses began to trickle in. First the doctor who was going to perform the surgery. Here, at the last possible minute, he decides to convince me to go with open surgery instead of laparoscopic (which had been my hope the entire time). He explained that he was worried that the cyst was going to be hard to remove. I consented.

The anesthesiologist appeared for the first time. Thankfully, I had already been in contact with him previously as he was the doctor that helped me make the arrangements at the clinic (though I wasn't expecting that). He and the doctor had a quick back and forth about how long this was going to take. One hour, they decided. Two more jabs in the spine (bringing the total needle pricks to 8 for the day) and I was told I would be numb for two hours.

The biggest surprise was I was awake the entire time. I had been asking throughout the day and everyone said I would be under general anesthesia. Nope! I got to listen to the play by play given to me by the anesthesiologist, the doctors calling to the nurses to turn on the suction machine, the suction machine overheating, the suction machine being turned on again, the nurses sharing jokes and photos on their cell phones (yes there were cell phones on and ringing throughout...thankfully the surgeon never picked his up even though it beeped several times).

I was ok. I was actually really calm until...

I started to feel things. The surgery ended up being much more extensive than planned so it also took longer than planned. I asked if it was possible that I was actually feeling things. The anesthesiologist said no way. A few minutes later he started injecting meds into my IV and then urged the doctors to finish up. I was in the operating room for close to three hours from start to finish.

Remember those narrow halls that made it impossible to wheel me into the operating room? So how are they going to get me back to my room??? They carried me. Thank goodness I don't weigh very much. To make the corner into my room they had to lift my upper half up over the banister. I was just praying they wouldn't drop me!

I spent two nights in the clinic. I was taken care of very well. I was fed starting at lunchtime on the day following the surgery. Pain and nausea meds were readily available. DIRECTV was on the miniature television. Two of the doctors checked on me the next day. On the third day they said I could go home.

Although my surgery was more extensive and thus more expensive than we had been told originally, it only came to $2,100. That included the two nights in the clinic.

The plan had been to pay with a credit card, but in Ecuador the fees for using a card are usually added on top of the price. Credit card fees run between 10 and 20%. So instead of paying hundreds of dollars more we decided to make a bank transfer. This was simple enough and only cost $30, but it took over a week to actually get the money into their account because of some issues with the international transfer.

Lesson: Surgery in Ecuador can be had at a much lower cost. It's a good idea to start taking out cash little by little depending on your ATM limits or have a chunk of money available in an Ecuadorian bank account to quickly pay or transfer payment.

I really did have a good surgeon. He was very nice and continues to check up on me. This was the comforting side of the story. You can get good, professional surgery in Ecuador and at a decent price.

As a quick note to anyone thinking to have surgery in Ecuador, if you don't speak good Spanish, you should really have a trusted translator available to fight for what you want and to make sure you know exactly what is going to happen.

The traumatic side were the unexpected parts like being stuck with needles over and over again, being talked into open surgery at the last minute, being awake when I thought I'd be asleep, being carried by two struggling Ecuadorians, and the waiting (which should NOT have been unexpected...we're in Ecuador!).