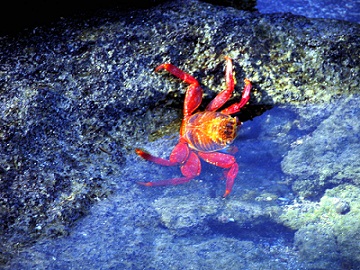 The Sally Lightfoot Crab is also known as the Red Rock Crab or Red Lava Crab. They are often found on the Galapagos Islands hanging with the Marine Iguanas. They also live throughout the western South American coast.

Young crabs are dark colored and blend in well with the lava rock where they are found. Adults vary in color from reddish brown to bright red with bits of pink, yellow, and blue. Really the rainbow's the limit.

The crabs are very quick on their feet and hard to catch. Author John Steinbeck described them as being able to move "in any of four directions" and able to "read the mind of the hunter." They aren't usually consumed by humans, but are used as bait.

The crabs eat mostly algae. When disturbed, they squirt out water like a water gun.

You may enjoy these pages...