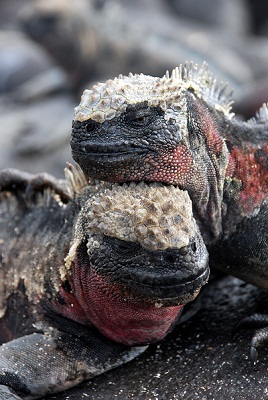 Another unique species....the Galapagos Marine Iguana. This iguana is the only sea-going lizard in the world. They are found along the coastline of most of the Galapagos Islands. There are an estimated 200,000+ living on the islands.

An interesting discovery was made as to how these lizards deal with lack of food. Instead of just losing weight, they actually shrink in size. Scientist believe they digest parts of their bones. Some were seen to shrink almost 20% in length. Then when food is plentiful, they grow again. So far this is the only adult animal known to do this.

Marine Iguanas eat mostly seaweed and algae. They can dive under water up to 30 ft and stay under for up to an hour. After being in the water, they can be seen warming themselves on the rocks. Special nasal glands allow them to "sneeze" out the salt they inhale, so they are often seen with white salt marking on their heads.

Young iguanas are black in color. Adults have different mixtures of black, red, gray, and green markings. They vary in size depending on the island they live on.

The sea going habit of these lizards does make them prey for sharks and larger fish. Cats and dogs will also attack and eat these tame animals.