School in Ecuador can be an interesting experience. My son and I had to learn as we went along five years ago when he attended 2nd grade in Tena.

You have two options when choosing a school. Public or private. Public schools have no registration fee, but do ask for money throughout the year since government funding usually does not cover all aspects of schooling. My son was in public school and we have probably paid in $30 for the first half of the year.

Private schools usually charge a monthly fee. You can find private schools that teach all in English, especially in Quito, Guayaquil and Cuenca.

The downside we have seen to private schooling is the tendency to pass kids just to keep their parents happy and paying.

My brothers were in a private school in Ecuador and they did little more than run around; and the girls would do their homework for them. That didn't fly with my parents so they were taken out after a few months.

Recently two of my nieces attended the same private school. When they transferred to public school they were told that the new school couldn't base their grade level on the grades given at the private school. The teachers at the public school said that they have no way of knowing if those grades were just paid for or not. (We've since found out that this particular private school does not even have their paperwork in order to function and the local officials are turning a blind eye.) 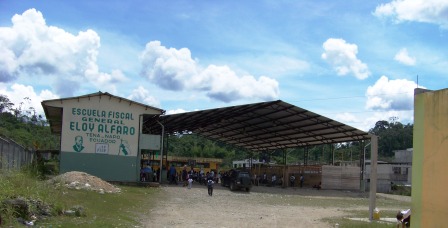 The registration process for school in Ecuador was pretty straightforward. A photo and a copy of the child's cedula (or passport) is all one really needs.

Most schools also require the report card from the year before to make sure the child is placed at the right grade level. I had homeschooled my son up to this point so I had no official report card to show. He was placed in the grade I said he should be in on a trial basis. Once they saw how he was doing he would be either moved up or put back. But he was right where he should be.

The majority of schools require students to wear a uniform (only a few private schools in Ecuador do not require a uniform). This can be a considerable expense, especially at private schools. Most schools have two uniforms, one formal the other informal for physical education days.

Girls uniforms usually consist in a skirt, polo or button-down top, white socks and black shoes for the formal uniform. And a tee shirt and sweatpants for physical education. Private schools can be much more complicated with ties, special socks and shoes.

Boys uniforms normally means dress pants and a polo top. And the physical education uniform is very similar to the girls. 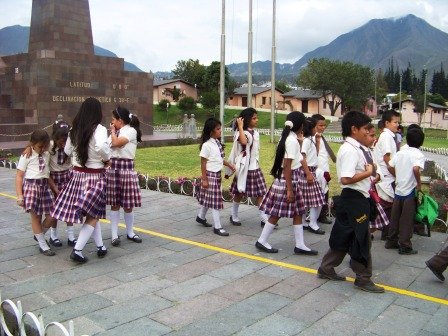 Most kids start school in Ecuador quite early in the morning. My son had be to school by 7:15 a.m. He got one recess period. And is out at 1 p.m.

Lunch service is not available at school. So school lets out in time for kids to head home for lunch. Some schools do offer a government provided snack. This usually includes a thick drink called "colada" made from oatmeal or other grains, and cookies or granola bars.

Parents usually send a bit of money with their kids to buy a snack at the vendors at the school gate or at a nearby store. I would send 25 to 50 cents with my kid. He ends up buying junk food and cheap toys. So whenever I have something at home to send with him I skipped the school allowance.

Even though the days are quite short the year ends up lasting 10 months or more. Leaving summer vacation almost non-existent.

Days off from school in Ecuador can be quite frequent. Local, national and religious holidays are all valid reasons for a day off. But in some cases the holidays must be made up.

For example, my son had the Monday after New Years off, but he had to make it up going to school the following Saturday. I'm not very in the loop, so I'm usually caught by surprise when he comes home to say he has school on Saturday. Apparently you can find out about school cancellations and extra days on the radio....time to upgrade to Internet updates! :)

Really? Sadly, yes. Kids have to guard their personal belongings vigorously, because other kids will swipe their stuff. And not just nice stuff. I had to buy pencils almost every week because my kid has either lost them or they've been "borrowed" and never given back.

Most public schools have no extra funds to pay for maintenance on school buildings and grounds. So parents are asked to participate in a clean up day. Classrooms are painted and desks and other furniture is cleaned. Gardens are weeded and grounds are cleared of litter. Missing the clean up day will usually mean a fine.

The school my son attended was in need of three new classrooms, because of the number of students enrolled. But when the municipal authorities failed to provide the necessary materials as agreed upon, the school and parents took matters into their own hands. Parents were asked to contribute a certain amount for the materials and also to help with the construction of three wooden boxes under the covered basketball court. Someone commented that they look like little pig pens, but they hold one class of students each. 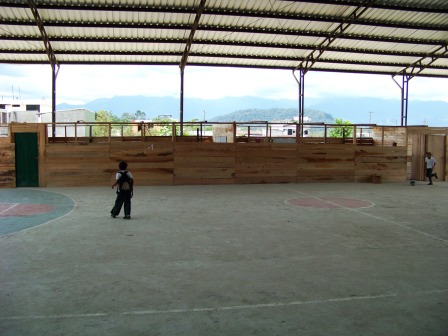 Meeting with the teacher is a pretty basic part of school in Ecuador. At the beginning of the year all parents must attend a mandatory meeting to elect parents to take on certain responsibilities for the class. Money is again asked for for things like copies the teacher makes of tests, drinking water for the kids and other things needed by the teacher (one thing on the school supply list was dry-erase markers for the teacher).

There is also a meeting with the whole school. Again to figure out financial aspects of keeping the school working. This year we had to pay an amount to cover the mid-morning snack and a guard to watch the school at night. The meeting lasted almost 3 hours; it started way after the scheduled time and there was lots of arguing back and forth over the amount of money to be paid. I found it tedious and exhausting.

Once these big things are settled you will still be called in for different meetings, either with all the parents or individually about a specific problem with your child.

I'm not too impressed with teaching methods at school in Ecuador, especially in public schools. Mostly because everything is by rote with few hands on activities. Of course this is probably due to the lack of funding.

Kids in higher grades are often sent to do research on the Internet. And since few have a computer at home, Internet cafes tend to fill up after school with kids doing homework.

English is taught at every grade level. So technically all kids should speak English by the time they graduate, but sadly many English teachers don't even speak English. And the English workbooks for each grade level vary little from the year before.

A visitor left this link in the comments below and I just had to add it to the page, because it is a great place for those looking for a good private school in Ecuador to send their kids to. Thanks to Alexis for the info! www.portaldelcolegio.com