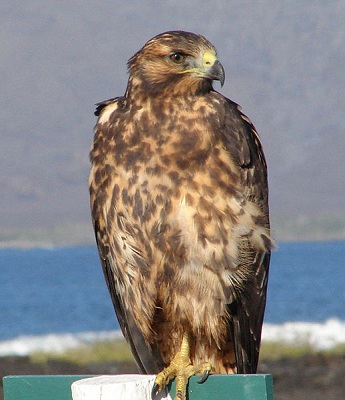 Humans have since introduced cats, dogs, and goats which threaten many species on the islands, including those normally eaten by the hawks.

These hawks are similar in size to other North American hawks. The females are larger than the males. Both are gray or brown in color with some lighter colored feathers mixed in.

The hawks eat mostly insects. They will also eat small lava lizards, snakes and rodents. Some have even been seen to steal eggs from other Galapagos birds. They also eat dead animals.

Due to low food supply and human disturbance of their habitat, the Galapagos Hawk is now extinct on several of the islands. The existing hawks show promise of a slow recovery.