Ecuador politics is one thing that definitely keeps life in Ecuador interesting. The people of Ecuador like to be heard, and when they are really passionate about something the MAKE SURE they are heard.

I will not be getting into political issues or debates here. I am going to focus more on the political process: campaigns and elections. And also what happens when the Ecuadorian people are unhappy with their politicians.

Campaigns in Ecuador politics are just as fierce as anywhere in the world. There are many political parties, some old and many new. People support their parties by posting signs, painting walls and hanging up banners. 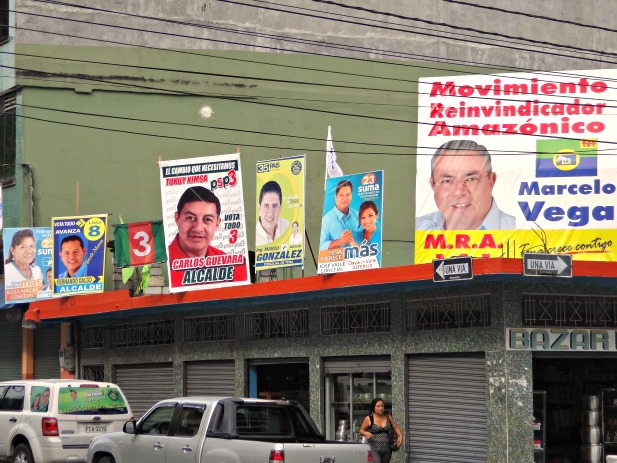 During campaign time candidates go all over visiting small communities, bringing gifts of food, clothing and booze. During one recent campaign I heard of one candidate that was passing out vouchers for free tablet computers - we were all wondering how he planned to pay for thousands of tablets if he did win. With the people's money?

TV ads are usually only run for candidates in big cities.

The day before an election is under "ley seca" when no one can drink alcohol. Campaigning must be finished before the ley seca begins. So the day before is crazy!

Parades of cars decked out in campaign propaganda, trucks full of people waving flags, and blasting horns go by. Groups of people promoting their candidates handing out flyers and small gifts. And lots of parties sponsored by the candidates.

Ecuadorians and residents (ages 16 to 65) holding a cedula are required to vote. The government hands out a small card when each person has voted that has to be kept until the next election proving that you voted. If a person is unable to vote for any reason they can pay a fine to get this card, but the fine is pretty high.

Foreigners with residency are no longer obligated to vote. 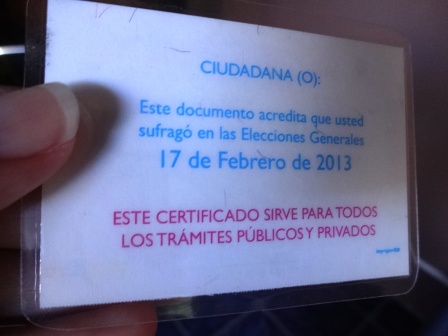 In days before an election, people can call or ask at special tables set up around town to find out where they need to vote. It's usually arranged by last name.

People are assigned to the same place their cedula was issued. This often means people have to travel back to where they were born to vote. If they no longer live in the area this can be changed beforehand, but it must be done well before the election day. A lot of people use the opportunity to visit their family.

Last time I had to go to vote at a school in town. The information desks also give a "mesa" number, which is the number of the room or table where you need to vote.

When you arrive (just after lunch seems to be quiet, since most people seem to go first thing in the morning) you wait in line at your room number. Members of the military or police force are on hand to make sure things are orderly.

I have nothing to say as far as Ecuador politics go, but I go to get the card proving I went. Without the card day to day transactions can be difficult and sometimes impossible. So instead of voting for anyone in particular, I vote "nulo" which means to nullify the vote. This is done by marking through EVERY candidate on the ballot.

In recent years life has been pretty quiet politically. No presidents have been kicked out of office for a while. But when we first moved to Ecuador it seemed that EVERY president was kicked out before his term was up.

Although the current president has lasted this doesn't mean that things are completely quiet in the world of Ecuador politics. There are still protests and strikes.

A few years ago, there was a strike of the beef producers and sellers. I'm almost vegetarian, so I didn't realize it. But others told me that you could hardly find fresh meat during about two weeks. 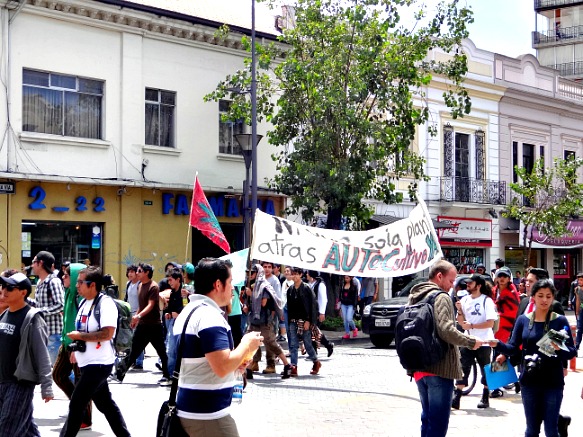 While in Quito recently we witnessed a peaceful march through the streets. They were wanting to legalize marijuana. They had banners and were yelling out different things. They were handing out leaflets proclaiming the benefits of pot. :)

Sometimes protest aren't quite so peaceful. There have been many times in the past where roads would be blocked. Back in the 90s and early 2000s we had to always plan for strikes that could prevent us from getting home while traveling. It was important to be in Quito or Guayaquil days before your flight out, just in case.

I remember cars driving down the streets of Tena was palm leaves tied just in front of the front tires to sweep nails away that were meant to puncture tires. All part of a strike against the government. The people in small towns and in the country usually seem to be the most vocal. I think that is why political candidates focus so much on those people when campaigning.