Ecuador climate is hard to sum up in just a few words, since the weather varies from region to region. As a rule the temperature usually varies according to the altitude. The farther up the mountains you go the cooler the air. Most areas of Ecuador also have a rainy and dry season.

Quito and other high altitude cities tend to have cool, spring-like weather. It rains from time to time, mostly from October to May. Day time temps go up into the seventies Fahrenheit (22º C) especially when the sun is out, and a t-shirt and jeans is sufficient. The evenings are cooler (45º F/7º C) and you'll want a sweater or light jacket when wandering around town. 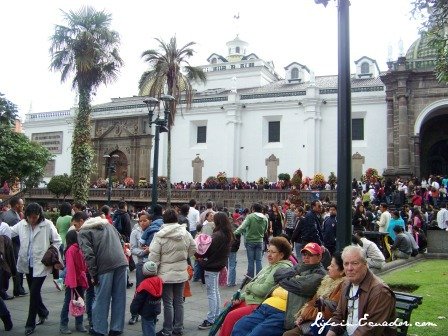 The cool climate in Quito and other areas in the Andes usually merits a jacket.

Snow rarely falls even at these high altitudes. The only glimpse of snow most Ecuadorians have ever had is of the snow capped peaks of 20,000+ feet (6,096m), which are covered in snow year round.

Even as you go south through the Andes temperatures remain spring-like year round. The "rainy season" of the Andes isn't particularly wet. Although the "el Niño" weather pattern brings more rain every few years.

Ecuador Climate on the Coast

The coast is usually hot and sticky. It also has the most distinct rainy season pattern, especially the northern coast.

Running from December to May, the rainy season is marked by hot temps and frequent downpours. The rest of the year is cooler and dry. So be prepared for either mud or dust depending on when you come. 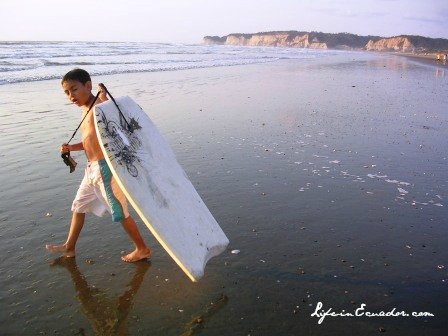 The best way to beat the heat on the coast...the ocean!

The average day time temperature is upper seventies (25º C) plus humidity. Nights can be sticky as well; air conditioning is common in nicer hotels.

The Ecuador climate in the Amazon region doesn't really have rainy and dry seasons. Rain and sun are common almost every day. This is my favorite Ecuador climate; of course I'm biased.

August and December through March have less rainfall, but it still rains regularly. Temperatures run in the upper seventies (25º C) during the day. It can get very humid and hot during periods without rain. Nights are cool and comfortable, especially when rain falls in the afternoon or at night.

Deeper into the jungle the climate changes to even hotter and even more rain. 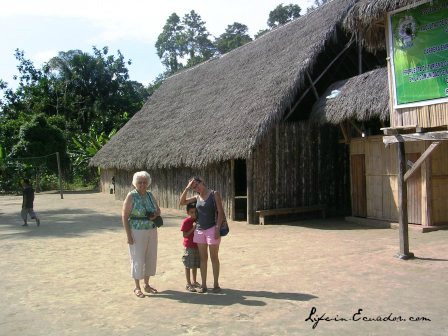 A hot and sunny day in the Ecuadorian jungle.

Rain in the Jungle

Rain in the jungle is my favorite. You can hear it as it comes closer and closer. Pounding the leaves and rivers. And two minutes later you're drenched. The rain is warm and refreshing. So even if you do get drenched, it doesn't ruin your day.

A while back, my 5-year-old and I were rushing home, because we could see and hear the rain coming toward us. We didn't make it, but we had tons of  fun running through the puddles. As kids, my brothers and I would choose to walk home in the rain; it was that much fun!

Rain while you're at home is even better! I love the sound of the rain on the tin roof. Sometimes its so loud you can hardly hear each other talk. And there's nothing better then sleeping with rain falling on the tin roof.

The Galapagos Islands also have a rainy and dry season. The dry season from June to December is cool and misty. The ocean water is also cooler during this time. While the wet season is is sunny, warm and only occasionally wet.

Really, the weather in Ecuador is beautiful year round.