I've been thinking about some of the typical things you see on an Ecuador bus trip. Some are funny, some not so funny.

A bus zooming through the mountains of Ecuador

I've traveled Ecuador almost exclusively in bus because of the cost benefits.

Generally the cost is $1 (USD) per hour, although this price was based on travel time years ago before roads were repaired. So your time on the bus may be less than the number of dollars you pay. I like to think it's going to take the old number of hours and be nicely surprised when you get in an hour -sometimes hours- earlier.

Roads have been greatly improved in the last several years. One example is the road between Baños and Puyo. When we first went to the jungle in the late 90s it was quite the ordeal. A never ending bus ride.

The part between Puyo and Baños was actually scary. The road was a winding dirt path at the edge of a cliff. When looking out the window it often seemed there was no road below you, only air.

Because of this difficult road, the trip would take three to four hours, depending on how cautious your driver was. Since then, several tunnels have been built to bypass the most treacherous parts of this road and the whole length has been paved. Now the trip can be made in two hours or less.

Buses themselves have also improved. Most have comfortable seats, large windows and decent shock absorbers. 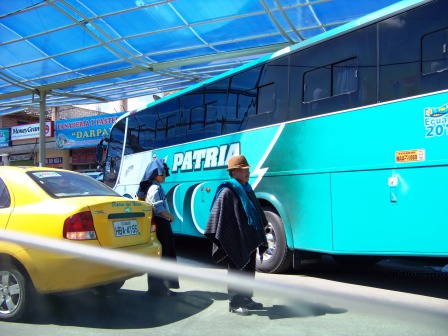 What does religion have to do with the Ecuador bus trip? It is rare to come across a bus without some type of religious relic. Older buses will have the whole front inside of the bus covered with religious stickers and little icons. Even newer buses tend to have at least one little statue where the bus driver can see it, complete with little lights that come on each time the brakes are applied.

And speaking of those little lights... The belief in destiny is very strong in Ecuador. This explains to some extent the crazy driving you will encounter. It doesn't matter HOW they drive because people believe that it all depends on WHEN your time has come. So the little lights around the image are like a quick prayer asking that this not be their time and if it is that they be received favorably. It can be nerve racking for those of us who don't believe in destiny.

I recently was on a packed bus from Quito to Tena. We were squashed up front with the driver. Along the road there are several Virgin Mary statues. Every time we passed one the driver and his helper made sure to cross themselves and say a few muttered words. Again religion plays a big part in the Ecuador bus trip.

If you are concerned about the way a bus driver is driving you have ways of protecting yourself. You can download the following information to bring with you on your trip. It includes the traffic laws and phone numbers to be able to call the police for help:

On a bus trip in Ecuador you are sure to be entertained in one way or another. Music is constantly blasting; usually something super rhythmic and Latino. It's amazing how you learn to just tune it out no matter how loud. I could never sleep at home with so much racket, but on the bus you do what you have to do.

After several years in Ecuador I took a trip in the US on a Greyhound bus. It was actually eerie not to have any music playing.

Most buses nowadays have a TV and DVD player to put on a movie for longer trips. Seems like a great idea, but I've come to dread this part of the Ecuador bus trip.

You can expect one of two kinds of movies.....super violent or terror/horror. I myself am very much against violence in any form, so that coupled with the fact that my little boy is often with me makes this part of the bus trip unbearable.

We have gotten quite good at keeping our heads down so as not to see what's going on. And I try to converse with the little one or sing to him so that his mind is not on the audio of the movie.

Some bring movies with and suggest their movies before the driver puts one on. Often they will accommodate your request.

Another way to be entertained is by the variety of people you encounter on the bus. Just seeing what people bring on the bus is interesting. Once we rode on a bus with two llamas on top. It was funny to see their shadows swaying.

Buses can also be packed full with so many people that they are almost sitting on your lap. Once my brother had a baby sitting on his shoulder. The baby wasn't wearing a diaper and later when my brothers shirt was wet he put two an two together. Oh the memories!

It is actually illegal for interprovincial buses to have people standing.

Smells on the bus can be horrid. Remember those commercials for Dial soap? "You use Dial. Don't you wish everyone did?" I replay that commercial in my head almost every time I'm on the bus.

Necessities while on the Bus

While on a long bus ride, our bodies often beg for the basics...food, water and the bathroom.

As you go through larger towns you often have the first two brought to you. Vendors come onto the bus selling a variety of things....from pop and water to hamburgers and ice cream. A lot of the food sold on buses might look pretty scary and you are probably right to be scared. So I try to remember to bring a stash with me, but in an emergency the right vendor can be a lifesaver

A bathroom can be a problem. On extra long Ecuador bus rides there is sometimes a bathroom on the bus. But it is usually reserved for the ladies and you have to ask the driver's helper for the keys. A friend of mine recently tried out the bathroom on the bus. She said it was swerving so bad she couldn't even go.

On buses without a bathroom (or if the bathroom is out of order), just ask the driver to stop. They will. Sometimes they gripe about it a bit, but they would rather stop than have to clean a seat up. And you're usually not the only one thinking a bathroom would be nice. Often half the bus gets off. If someone does have the bus stop, take advantage of the opportunity.

Some of the roads of Ecuador can be pretty curvy. I've found that the nice smooth roads combined with the curves is a perfect recipe for motion sickness. I can usually make it home by opening windows and I always carry a sucker in my stash. But if you ever are desperate yell "Funda!" and the driver's helper will run back with a plastic barf bag.

The bus can be delayed for many reasons. Sometimes an accident or mudslide can keep you from getting where you're going. 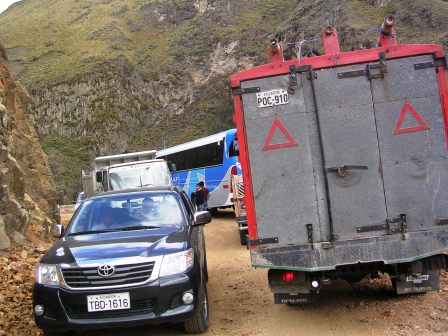 Patience is a good thing. Some choose to take alternative routes, but this can add just as many hours to your Ecuador bus trip. Since you never know what can happen it's good to plan ahead and make sure you have time to get where you want to just in case.

Traveling during the day is preferable. If you do run across a mudslide or accident during the day, it's much more likely that it will be promptly cleared. Also for safety reasons travel during the day is recommended. Most robberies and accidents take place at night. Travel along and to the coast at night is especially warned against.

Traveling by Ecuador bus is a great way to see the country and an interesting part of Ecuadorian culture.