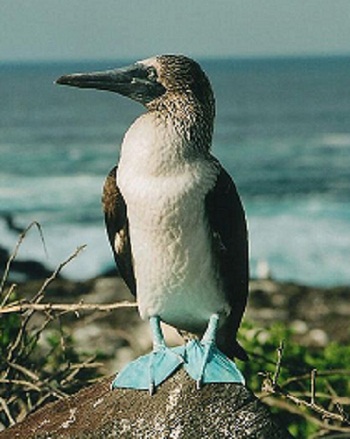 One highly interesting bird found on the Galapagos Islands is the Blue-footed Booby.

The name "booby" comes from the Spanish wordbobo, which means stupid or clownish. These birds are very clumsy on land and easily caught by humans due to their tame nature, thus their name.

The Blue-footed Booby is found on many Pacific Islands, not only the Galapagos. They are marine birds whose diet consists entirely of fish. Small school fish such as sardines and mackerel are an important part of their diet. Large groups of boobies can be seen hovering together over the water. When they are given the signal they will dive into the water together like arrows to catch fish. They can dive under water up to 82 ft (25 m) deep.

They only come to land to breed. Both male and female take care of incubating the eggs. When the eggs hatch, the new fathers dive in the shallow waters near the nesting site to bring food to the nest. As the chicks grow mothers also share in their feeding. Of the 2-3 eggs laid usually 1-2 survive. 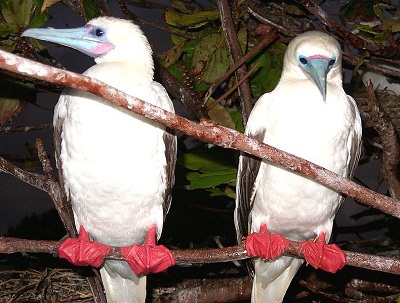 Cousins to the Blue-footed Boobies are also found among the Galapagos birds. The Red-footed variety are very similar to the blues. They are smaller and have red feet instead of blue, of course.

Another difference is that the Red-footed booby nests in bushes or small trees instead of on the ground like other boobies. 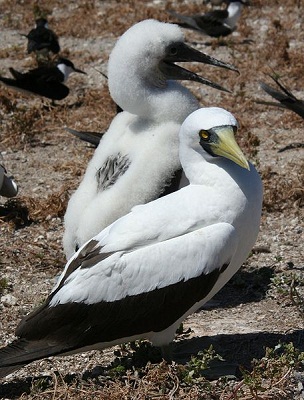 Another booby found on the Galapagos is the Masked Booby.

Their name comes from the gray mask around the eyes of this otherwise white bird. They are the biggest in the booby family.

The chicks of these boobies have to fight to survive, with the stronger chick often attacking the weaker causing it to fall from the nest and die of hunger or weather. The scarcity of food on the barren islands means that parents can often only feed one chick.